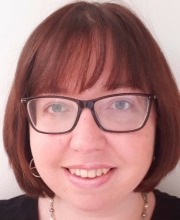 Dr. Baricz received her doctorate in English from Yale University, where she specialized in sixteenth- and seventeenth-century literature. Her dissertation project examined the development of multi-part and sequel drama in the early modern period, showing how an interplay of cultural, social, and economic factors led to changes in the formal characteristics of commercial plays and shaped the manner in which they circulated from the playhouse to the printing house. Dr. Baricz's secondary specialization is translation. In 2014/2015 she was a Fulbright Research Fellow at the University of Bucharest, where she translated Ion Budai-Deleanu's early modern mock-epic, The Tiganiada, from the Romanian; in 2018 she became a translator-in-residence at the National Literature Museum in Iasi, Romania. At Mandel Scholion, she will work on two related projects. The first, Playing Parts: Seriality in the Early Modern Theater, traces the rise of sequel drama from the first surviving secular plays in English to post-Restoration experiments that point in the direction of the serialized novel. A second project, Aging in the Early Modern Theater, is a study of old age, as a cultural and social process encoded into both the practices and the products of the early modern theatrical environment.