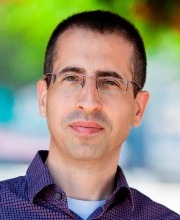 Giddon Ticotsky graduated from the Department of Literature at Tel Aviv University in 2014. In that year he won the Israeli Bahat Prize for the best original scholarly book in Hebrew for his Ph.D. dissertation about Israeli woman-poet Dahlia Ravikovitch (1936-2005), one of the most significant figures in modern Hebrew literature and poetry. Apart from this book, published by Haifa University Press and Yedi’ot Akharonot in 2016, Ticotsky authored two other books in Hebrew: 'Light along the Edge of a Cloud: Introduction to Leah Goldberg’s Oeuvre' (Tel Aviv: Hakibbutz Hameuchad-Sifriat Poalim, 2011) and 'The Little Prince: Seven Essays on "The Little Prince" in light of Antoine de Saint-Exupéry’s Oeuvre' (Tel Aviv: Hakibbutz Hameuchad, 1998).

Prior to his fellowship at Mandel Scholion Center, Ticotsky was a Visiting Scholar at Franz Rosenzweig Minerva Research Center for German-Jewish Literature and Cultural History, The Hebrew University of Jerusalem; At Taube Center for Jewish Studies, Stanford University; and at Herbert D. Katz Center for Advanced Judaic Studies, University of Pennsylvania. At Stanford he also held a Lecturer position.

In his research at Mandel Scholion Center he explores the representations of the Far East in Modern Hebrew literature, arguing that they play a prominent role in its self-fashioning as a Western literature. In another project conducted at the Center he focuses on politics and poetics in Israel as reflected by meetings held by Israeli prime ministers with writers and poets.