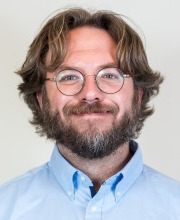 Dr. Guy Ron-Gilboa studies medieval Arabic prose literature in both its ‘elitist’ form (adab) and its popular manifestations. After having earned his doctorate in Arabic language and literature from the Hebrew University of Jerusalem in 2018, he was a postdoctoral fellow of the Minerva institute at the Freie Universität Berlin. His doctoral dissertation investigated the occurrences and discussions of wonder and the marvelous in four major works of the ʿAbbasid period. His current research expands the time frame and scope of genres set in his dissertation. By exploring discussions of wonder in various medieval genres and texts dating from the ninth—thirteenth century and ranging from analytical definitions to narrative representations of marvelous phenomena and the responses that they trigger, Ron-Gilboa seeks to offer a wide and nuanced perspective on the different and changing meanings, perceptions, and uses of wonder in medieval Arabic literature. Ron-Gilboa has taught for several years at the Arabic Language and Literature department of the Hebrew University of Jerusalem. He has published several translations of modern Arabic poetry and short prose in Hebrew.