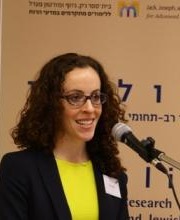 Rachel Seelig just completed the academic year as Visiting Scholar in the Department of Germanic Languages and Literatures at the University of Toronto. In the fall she will move to Ann Arbor Michigan to begin the year as a Frankel Fellow at the Frankel Institute for Judaic Studies at the University of Michigan. There she will finish co-editing, together with Professor Amir Eshel, a volume entitled The German-Hebrew Dialogue: Studies of Encounter and Exchange (forthcoming with De Gruyter, 2017), which stems from a conference that she organized at the Mandel Scholion Center in 2015. She also plans to work on a monograph on German-Hebrew literary bilingualism. Her first book, Strangers in Berlin: Modern Jewish Literature between East and West, 1919-1933, will be published by the University of Michigan Press in September 2016.