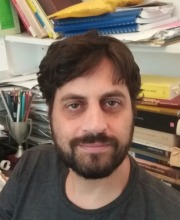 Room 234, Mandel Building, Mount Scopus Campus
02-5880308
yosiisra@gmail.com
Dr. Yosi Yisraeli studied Late Medieval and Early Modern History at Tel-Aviv University. His research focus on mutual reflections and intellectual contacts between Jews and Christians and the subsequent formation of Judeo-Christian theological and historical traditions. He is currently developing his dissertation about the theological writings of the converted Bishop of Burgos, Pablo de Santa Maria (c.1352-1435), into a book. It is a part of a larger project that aims to evaluate the impact of the Iberian mass-conversions on Jewish and Christian biblical and theological scholarship in the first half of the fifteenth century, and the emergence of new forms of hermeneutical, historical and linguistic criticism.  For the past years he was a fellow at the Center for the Study of Conversion and Inter-Religious Encounters at Ben-Gurion University. He co-edited the volume, Contesting Inter-Religious Conversion in the Medieval World (Routledge 2017).